The Tonga volcano shook the globe. However, the impact did not end with the eruption because the event could potentially affect climate change. According to scientists, the volcanic explosion in January’s water vapor injection into the stratosphere may have a minor, if transient, warming impact.

Also Read: Force from Tonga’s Eruption Could Have Created Mutliple Tsunamis the Size of the Statue of Liberty

Scientists stated Thursday that the massive eruption of an undersea volcano in the Pacific Ocean in January, which caused a worldwide shock wave, also sent enormous volumes of water vapor into the upper atmosphere, where it may have caused a slight, temporary increase in global temperature.

The researchers calculated that at least 55 million tons of water vapor were being injected into the stratosphere, and they added that this might temporarily result in increased ozone layer degradation.

The Hunga Tonga-Hunga Haapai volcano on the island country of Tonga saw its greatest eruption in decades on January 15. Along with lesser tsunamis brought on by changes in air pressure as the shock wave circled the globe, it triggered a tsunami that destroyed areas of Tonga and smaller tsunamis hundreds of miles away.

The explosion of superheated molten rock also caused seawater to flare explosively into steam since it happened roughly 500 feet underwater. A 35-mile-high cloud of volcanic gases, water vapor, and ash was produced. That resulted in an increase of at least 5% in the amount of water vapor in the stratosphere, which has an upper limit of 31 miles.

This has not happened since we’ve been able to measure stratospheric water vapor, which started about 70 years ago, said Holger Vömel, a senior scientist at the National Center for Atmospheric Research in Boulder, Colo. Dr. Vömel is the lead author of a paper on the findings published in the journal Science.

Water vapor absorbs heat from infrared radiation from the Earth’s surface and emits it again, much like carbon dioxide and other greenhouse gases. So it would be predicted that adding a lot of water vapor would increase warmth for a while until the gas evaporated.

Land-based volcanoes seldom erupt with large volumes of water vapor, but they may discharge vast quantities of sulfur dioxide gas into the stratosphere, which can temporarily chill the planet. The most recent of these eruptions, Mount Pinatubo in the Philippines in 1991, resulted in a 1 degree Fahrenheit (0.6 degree Celsius) reduction in world average temperatures for more than a year.

Any estimate of the additional temperature that the Tonga eruption would generate is now very speculative, according to Dr. Vömel. He added, only in the opposite direction, “but I wouldn’t be astonished if it was the same order of magnitude” as Pinatubo. He said the additional warming would probably last longer than the post-Pinatubo chill. 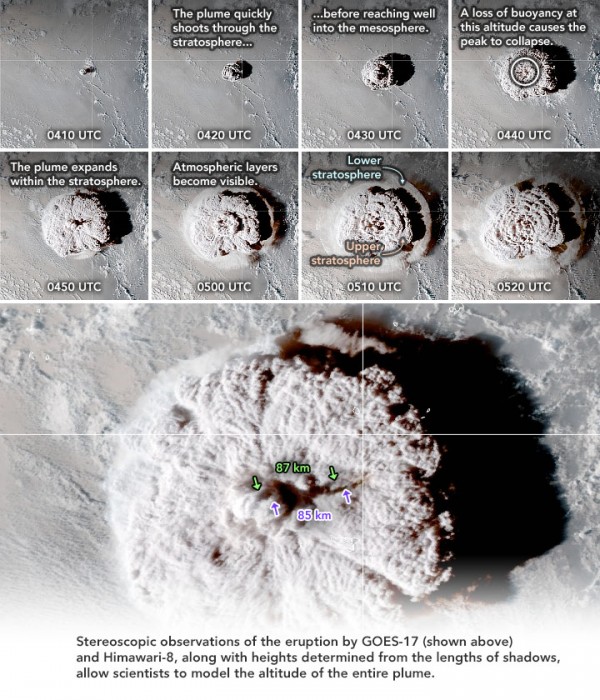 The Tonga eruption “could add something on the order of 0.05 degrees of warming to global average temperatures,” likely for three to five years, according to Susan Solomon, an atmospheric scientist at the Massachusetts Institute of Technology. She described the temperature impacts of changes in stratospheric water vapor in a 2010 study.

The atmospheric chemistry that destroys ozone, an oxygen molecule that shields life on Earth from the Sun’s damaging ultraviolet radiation, would be altered by all that water vapor.

Dr. Vömel stated, “By dramatically increasing the amount of water vapor, that should lower the amount of ozone.” But he added it would only be short-lived since the cycle of ozone creation and destruction “keeps continuing.”

Microplastics Found in 75% of Fish Meant for Human Consumption: Is It Still Healthy to Eat Seafood?

Viruses Can See and Hear Their Surroundings Once Inside Us [Study]

Colorful, Unique Plumage of Songbirds Raises Risk of Being Traded, May Lead Extinction